(This blog post is published in English as it is a part of our english lessons. Made by Ebba and Albert at Tanna/Vanutau, October 2018) 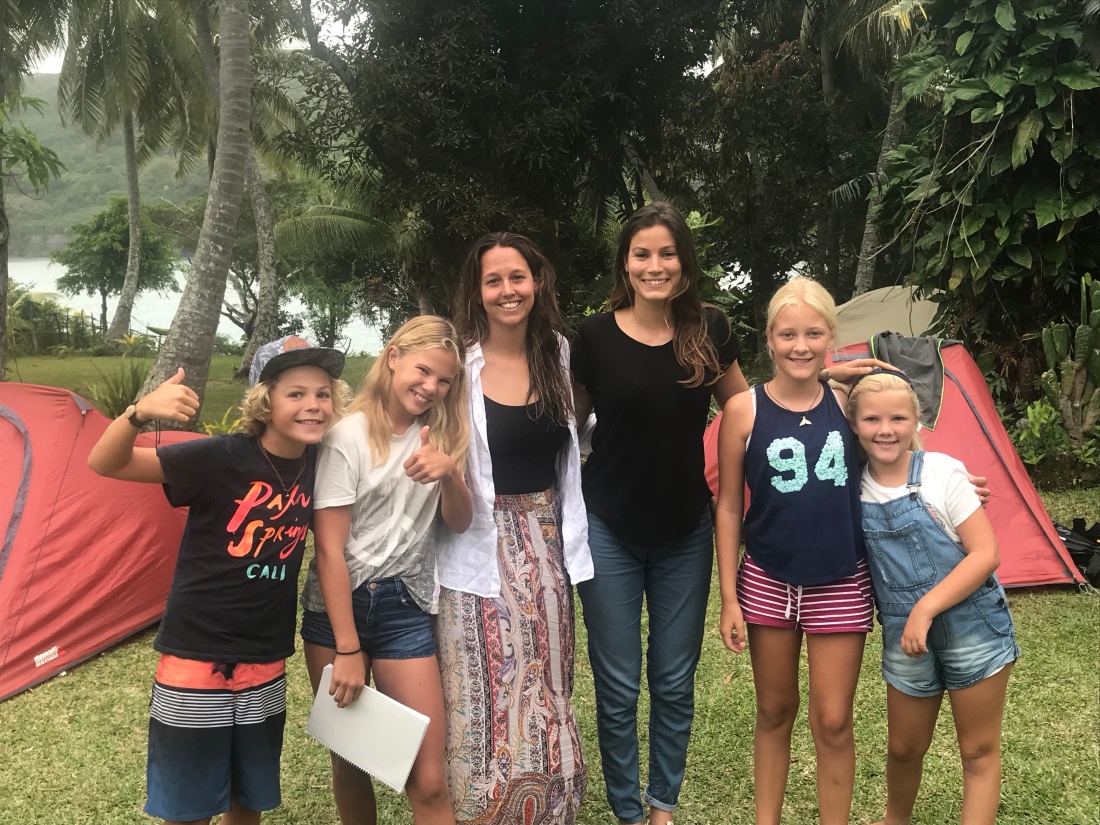 On the island Tanna in the Vanuatu archipelago, we had some funny and memorable days. One day we met a couple of interesting girls up at the yacht club. It turned out that they were scientists from Australia. They told us briefly about their project, and we become very fascinated. We were eager to learn more and found that interviewing them could be great. Hence, Tiril, Tuva and we sat down and started preparing the interview. After many hours with preparation we found ourselves in the dinghy on our way onshore, all feeling a bit nervous. We had never held an interview in English. The adults joined us, but the interview in particular was to be held by the kids. When we walked up the path to the yacht club the nervousness was on full blast. However, it calmed down once we saw the scientists. We were thinking: They are only two normal human beings, don’t worry. We introduced ourselves by name and age and told them that we were out on a sailing journey. Finally we were ready to start the interview.

Johanna and Alyssa were very nice people. It was easy talking to them and no problem if we needed to ask some of the adults what some of the words were in English. It became a long interview, but we learned lots of interesting things.  We started with some easy questions.

Both girls had two important jobs in the project. Johanna was from Germany, that is not far from Norway. She had moved to Australia eight years ago. It seemed like she was very happy about her choices in life. She had already started on a PhD, and that was why she was taking part in the project on Vanuatu. To us it sounded like Johanna loved her job. In addition, she was working in a company called EarthCheck. EarthCheck certifies companies in the tourist industry when it comes to environmental impact.

Alyssa was working with something different from tourism. She grew up in Australia close to the beach and had always loved snorkelling. She was working as a marine biologist, and most of her work was taking place in the ocean among the fish and the corals.  She had also recently started on her PhD and was very happy to take part in this project. Moreover, Alyssa had a second job. She was taking care of foreign students guiding them around in different areas of the South Pacific.

As you need to talk to many different people, you can’t be shy when you are working with tourism. Johanna told us that meeting people and getting information from them, serves as the foundation when you are analysing how the tourist industry on an island is developing. Johanna was looking at how hotels and restaurants were dealing with climate changes. The frequency of storms and cyclones is increasing and causes problems for the local tourist industry.

When we were asking about potential challenges in the project Johanna mentioned the complexity. Clearly it was an advantage to be many people and fields of study. However, it could also be challenging to coordinate and communicate across different locations and offices. The project is huge with different branches, locations and subjects. We were surprised of how complex such a project can be. Maybe you are surprised to? Tourism, marine biology, coastline, economics and much more were included. And home in Australia several people received input to analyse information.

To Alyssa that mainly performs her studies in the ocean, weather could be a challenge. Needing to get out in waves, wind, rain and poor visibility can make her work harder. Her goal in the project was to help increasing the fish stocks at the reef. The fish stocks had decreased due to overfishing and coral bleaching. Now it was hardly eatable fish left. There were 20-30 species of fish left inside the reef on Tanna, whereas more healthy reefs usually have more than 100 species. Allyssa wanted to try to establish a preserved area around the reef. If the people in the villages quit fishing inside the reef for a period, the fish would probably return.

Allyssa was mainly working by analysing film and pictures she shot under water. She often used a GO-PRO camera, but she also had a larger camera that she sometimes uses. She had outlined areas on the reef and was studying the development through counting and mapping of fish and corals. Allyssa had done similar projects on Bahamas and in Thailand, Indonesia and Australia.

Johanna believed that some of the most interesting findings in the project was how people on the island had demonstrated courage to build up their houses and businesses after the cyclone. They had gotten aid from banks and charity organisations, but the most amazing was the people’s spirit to never give up! Imagine that you have a small house and a restaurant. You’ve got children to feed and just enough resources to take care of your family. Suddenly a cyclone comes and destroys everything you have, and you need to start from scratch. Then you need courage. The people on the islands have courage.

The girls were really enjoying their jobs. We couldn’t find anything they didn’t like with the project, except from leakage in their tents maybe 😊. Travel, meet people, teamwork and making new friendships were all positive aspects that the girls liked regarding their jobs.

The interview came to an ending and we all felt that we had learnt a lot. On our way back in the dinghy Ebba was talking about what she wanted to work with when she grew up and it was no surprise that becoming a marine biologist such as Alyssa was on the very top on Ebba’s list.

Please also find Tuva and Tiril’s versions of the interview on keablog.no.

All the best from

View all posts by ulafamilien

5 thoughts on “Interview with Inspiring Scientists at Tanna”